On August 26, the 2017 FitWit Team Games took place at FitWit O4W. Ten teams competed in a series of 8 fun, exciting and physically challenging events for a chance to earn not only some sweet hardware, but also ultimate bragging rights on who is the best FitWit Team in all the land. Each team put together rosters of 4-6 people, a cool team name, and for spirit points, a flashy team outfit to rock during the events.

For our first 2 events we went old school and took things outside at the O4W Skatepark, where the field quickly filled with bright team t-shirts, costumes, referee jerseys, dogs, kids and not to mention a big a cheering squad to support everyone competing.

The Games quickly got started after a warm welcome by Kirkwood Head Trainer Ethan Duff, Team introductions, a scoring explanation, and warm up. 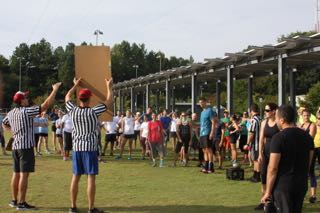 For this event the teams had to find their lungs and legs to help them complete a total of 350 squats after running with a teammate all the way to the end of the field and back all while each was holding a med-ball. The squats were broken up in a ladder formation, so the first two team members had to complete 80 squats after their sprint, then the next two 70, then 60, 50. . . down to 10. Teams had 12 min to finish and ended up heavy breathed and shaky in the knees. 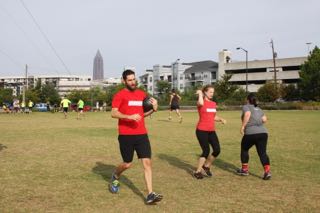 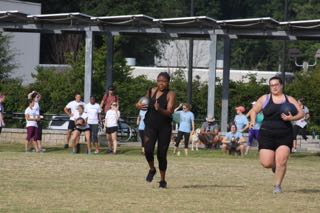 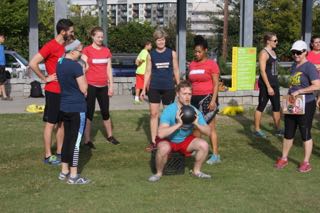 For all the long time FitWitters, this event should look familiar.

3 water filled buckets were positioned in the middle of a circle made by all 10 Teams who were lined up behind a cone about 15 feet away. Each team was given a sponge. The 1st person at the front of the line had to sprint to the buckets and dunk their sponge into the water and then sprint back to their team to pass the sponge to the back of the line in an over/under fashion. The last team member at the back of line then squeezed the water into a jug, ran to the front of the line, dunked the sponge and repeated. This was a fun, wet and dirt filled event that was scheduled to be 5 min. We clearly underestimated the drive these teams had to win, because in under 3 min they transferred 10 gallons of water. 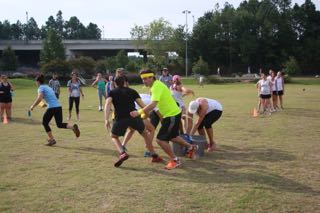 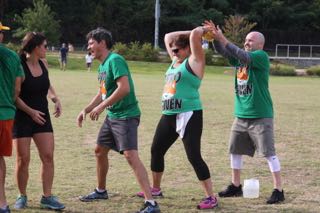 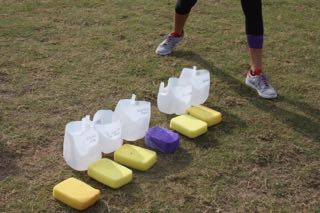 Once we wrapped up the first two events, everyone then walked down the beltline together to the O4W gym for the rest of the competitions.

This event introduced a new toy from the Kirk. The Air Bike. Designed to make your heart rate  skyrocket, this event did just that. Each team had to hop on this little cardio machine 12x (2-3x per person) and pedal their heart out to blow a foam roller from one side of the gym to the other as fast as possible. This only took a few seconds per person, but make no mistake that when you are pedalling as hard as you can, a few seconds can feel surprisingly long. All teams were very competitive in time, which made the hearts of spectators skip a beat. 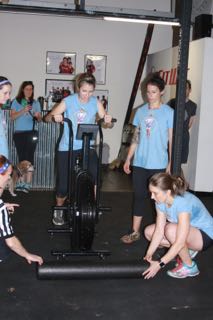 How many points can you get? Each team was given 4 bean bags and 3 min to score as many points as possible. If your bag made it in the hole, you earned 3 points and 1 point if it landed on the board. Only one person could throw at a time and had 2 chances to earn their team some points. Then they had to quickly retrieve the bean bags to pass them off to their teammate. The next in line could throw before the previous thrower got back with the bags, which made this a very fast paced race to earn the highest score for this event. 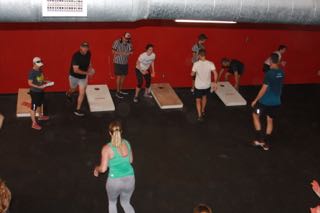 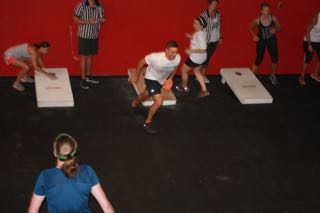 We got creative and took advantage of some architectural features on this one to challenge each teams accuracy and explosive power. Teams had to throw a med ball over a center beam in the gym and try to land it on a target drawn on the floor. Each member had 3 chances to make it into a 10 point zone, 25 point zone or 50 point zone. But, finesse was important because if you threw it too far, you’d end up in the 0 point zone. This turned out to be a show and tell on who could get the med ball over the 20 foot high beam…so remember to practice your wall balls for next year.

Appropriately named, Event 6 truly brought out the wit in all the FitWitters. The teams had to recreate five 8 digit number combinations going from 1-20 after sprinting around the parking lot and completing 25 double unders or 100 singles. 2 teammates went at a time to remember the number combination correctly. Quickly the teams figured out that there was some strategy to this competition and helped each other out to count the jump rope reps, so that numbers didn’t get scrambled. Teamwork makes the dream work. This event had a 10 min time cap, just to add a bit of pressure.

Because what kind of FitWit event would it be without some thrusters and burpees?

Everyone had to step up to the plate on this one, by either moving some weights or hitting the ground. Team members partnered up and after one completed 25 thrusters, the other performed as many burpees as possible in the remaining time. Each burpee completed earned their team a point. As the 25 thrusters were completed and the burpees started the gym filled with energy and cheers. This was a crowd pleaser for sure, as this 4 min event left teams laying on the floor and dripping in sweat.

A 5 minute max calorie row relay was a crowed pleaser. Keeping the excitement of Event 7 going and adding to it, our finale had constant movement from every team member and constant cheering from everyone there to support. With a mandatory switch every 10 calories, this event was more about quick transitions and keeping momentum going, then who had the strongest rowers…although that always helps. 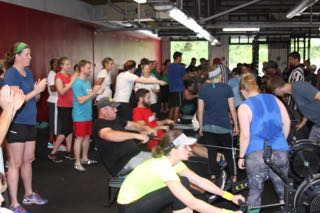 As the clock ran down cheers got louder and as soon as the timer buzzed, all teams were looking at each others scores, high fiving each other and congratulating them on how well every team did. And just when we thought the excitement had come to an end, the scores were calculated and the final standings were in. There was a tie for third place! As one would settle a tie in any respectable competition, our third place teams faced off in a heated battle of rock-paper-scissors. And, once all the rocks, papers and scissors were shot, here are the teams who earned a spot on the podium:

Congrats to all our competitors!

Something is wrong.
Instagram token error.
Load More
a

Check out the FitWit Workout