On August 24, the 2019 FitWit Team Games took place at FitWit Kirk. Eight teams competed in a series of SIX events, three fun, silly field-day games and three workout style events. We competed for cool prizes, but more importantly ultimate bragging rights on who is the best FitWit Team in all the land. Each team put together a roster of 4-6 people, a cool team name, and for a flashy team outfit to rock during the events.

For this event, each team got paired with a coach with the first task being to complete 300 singles as quickly as possible, switching teammates every 20 seconds. Once their coach counted the 300 singles for their team, it was a race for which group can pedal their heart out the hardest to get max calories! 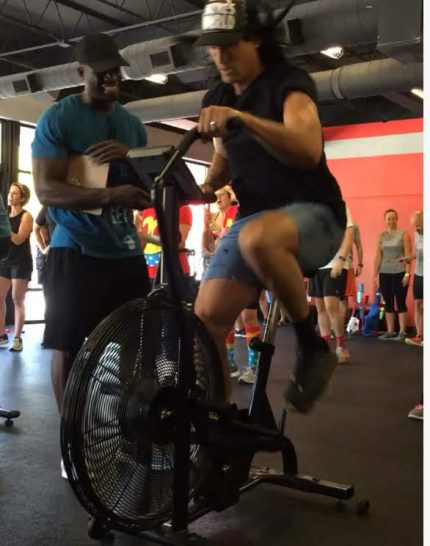 After a heavy breathing event like game 1, the next event was all about throwing accuracy and letting out our inner FitWit kid. Teams had to toss Bean Bags into the inside of the rings set up at various distances. Each member had one chance to either get 1/3/5 points depending on which distance they chose.

Set up to find the true FitWit partyers of the Kirk, the well known Flip-Cup drinking game was re-invented!

The set up was simple. All the teams lined up under the pull-up bars, the first person in line had to quickly jog over to their red box to flip the solo cup and have it land. They got three attempts, and then headed to the back of the line for some burpees.

How many tosses can you get in? With the last of the fun field day styled event, the ring toss was a hit!

For this one, the goal was to toss plastic rings to see which team could get them around pool noodles for the most points. 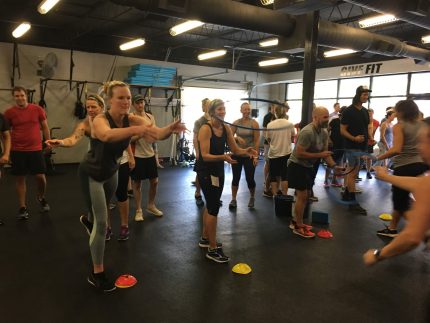 Game 5: Minute to Win it

We couldn’t have named it any better. This strength competition was set to see your gains from all your hard work in the gym, with one minute to get the max amount of reps and win it! The awesome FOUR exercises done were max pull-ups,  max push-ups, max goblet press,  max goblet squat in a minute. Each team picked one teammate for each exercise and depending on the weight and the reps would determine the number of points given, whichever had the biggest score in the team got that number written down. 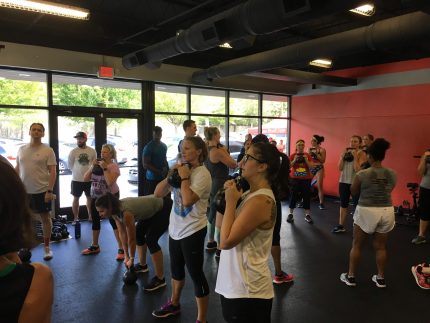 Finishing Team Games with a BANG. It was a rowing ladder to get to the finish line, with the goal being to see which team could finish 2,700 meters the quickest for the point. Before the start, teams were arranged by their current standing in team games. From there they decided who would be the 1st-6th rower, knowing that each rower had to progress by 100 meters. Starting with 200 meters and finishing with the longest piece of 700 meters.

The finale had constant cheering from everyone standing in the crowd cheering on their team for support. As the teams got closer to the 0 meter mark, the cheers only got louder, and when the horn sounded all the teams gave their teammates LOUD high 5’s and awaited the scores! 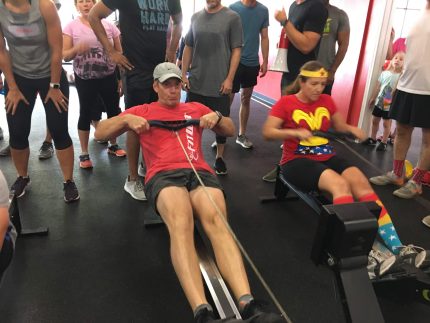 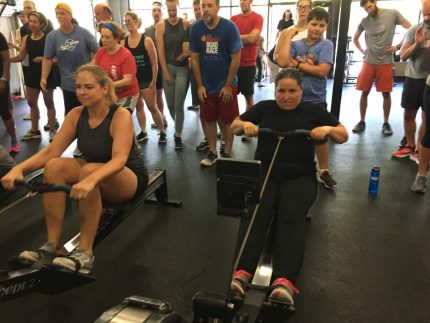 Congrats to all our competitors! Click here to check out the full 2019 FitWit Team Games Album

“Take the slack out!” Strength training is al

A beautiful scene as we closed out evening classes

Today we honor our MOTM, Allison L.! We are doing

Shoutout to the mighty few that made it out of bed

Have YOU started your pull-up challenge yet? There

🚨 Member of the Month Alert 🚨 Congratulati

Strength testing is back! Oh, and so is this 9-min

“Take the slack out!” Strength training is al

A beautiful scene as we closed out evening classes

Today we honor our MOTM, Allison L.! We are doing

Shoutout to the mighty few that made it out of bed

Have YOU started your pull-up challenge yet? There

🚨 Member of the Month Alert 🚨 Congratulati

Strength testing is back! Oh, and so is this 9-min