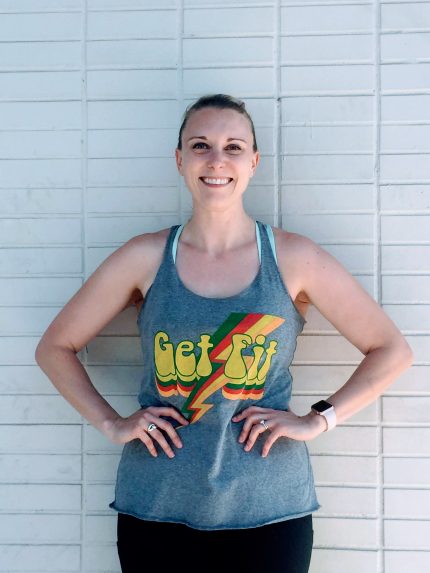 Jessica has been crushing it for the past SIX years at FitWit!  She was a member back in the days when we were doing burpees in the mud. She’s a shining star in our community and has really found her stride again after having a baby. Read on to learn more about this awesome member of FitWit!

When did you first start FitWiting? August of 2013…has it really been almost SIX years?! The other day at the gym I think I told someone I’d been a Fitwitter for three years…oops. Time flies! I had to go back in my emails to confirm, and there was the Scoutmob coupon that started it all back in 2013!

I was a dancer (ballet, tap, and jazz) for eight years until I got to middle school and had someone tell me that I didn’t have a “dancer’s body.” I could go on a whole diatribe about how terrible it is to say that to a 13-year-old, but instead, I’ll focus on the positive: moving away from dancing got me into soccer and basketball which showed me how much I love being on a team and that did wonders for my self-esteem. I played both sports all through middle and high school and enjoyed playing on rec leagues throughout college.

After college, I spent way too many hours on treadmills and the elliptical, thinking that cardio was the best way to stay in shape. I didn’t have an interest in group fitness classes. The few that I did try felt sort of clique-ish and weren’t very welcoming. In 2013, I was getting bored with my workout routine—I started to feel like a hamster on that damn elliptical, and running outside alone was getting old. That’s when a co-worker suggested that I try FitWit. I was super intimated at first—I remember thinking that I would probably never be a “red level” FitWitter. But unlike other group fitness classes, everyone at FitWit was so welcoming and friendly. It made me want to come back the next day.

Six years later, I can say that there are some days when I do complete a red level workout. There are also many, many other days when I do a blue or white level workout, and THAT IS OKAY. It’s better than okay! What matters is that I showed up. I put in the effort. I carved out some time for myself in an otherwise chaotic day. THAT is what matters.

There have been noticeable differences in my strength, body composition and running speed. I can lift and squat more weight than I ever thought would be possible. I can do multiple toe pushups in a row (never thought I’d be able to say that!), I can do some double unders, and overall I just feel strong.

What sort of changes in your life have you experienced out of taking on something like FitWit that were unexpected?

Gonna go out on a limb here and get a bit more personal/vulnerable…I had my daughter in October 2017 and had a challenging postpartum experience with anxiety and depression. I withdrew from everyone and everything, including FitWit and most days, felt like I was barely surviving. I knew that exercising would be good for me, but I couldn’t make myself do it, and that was really out of character for me.  Josh probably doesn’t remember this, but I ran into him at Chai Pani during this time, and he said something to the effect of “we’re always here when you’re ready to come back.” That really stuck with me, and although it took me several more months to make my return, I eventually did come back, and it changed everything. [Also, quick side note: getting back into exercise did make a huge difference, but coupled with medication and therapy. Exercise alone might work for some people, but it’s also okay to need more than that!] Even more than the workouts, FitWit helped me get back into a community. I was shocked at how many people remembered me, asked about my daughter, seemed genuinely happy to see me again in the gym. I always knew that FitWit impacted my physical health, but I didn’t expect it to have such a significant impact on my mental health, too.

Because it keeps me sane!! Because it’s 3 or 4 hours each week that I get to myself. Because it’s one of the few times during the day where I’m only focused on the “here and now”—I’m not worrying about the workday or things at home—I’m solely focused on getting that sled up the hill or holding that plank for another 30 seconds.

People will probably hate me for this, but any workout that involves running. I love to run. I especially love to sprint—there’s something about that feeling of pushing myself to the brink that I like. I also really like that “low risk, high reward” HIIT workout we’ve been doing, where we’re just using body weight.

Anything with that dang bike. I truly hate the bike.

Years ago, when we were still at the Boys and Girls Club, it was the middle of summer and had rained a bunch the day before, so the field was just one big mud puddle. I think Ginger was leading the workout and we were doing burpees in this mud pit, just covered head to toe in filth. I remember looking around thinking, “we’re all crazy!! Why are we doing this?!” That wasn’t the last time that thought crossed my mind at FitWit!

Increase the number of toe pushups I can do; get one (just one!) unassisted pull-up; increase my plank and hollow hold times

Go placidly amid the noise and haste, and remember what peace there may be in silence. Do not distress yourself with imaginings. Many fears are born of fatigue and loneliness. Be gentle with yourself. You are a child of the universe, no less than the trees and the stars; you have a right to be here. And whether or not it is clear to you, no doubt the universe is unfolding as it should. Whatever your labors and aspirations, in the noisy confusion of life, keep peace in your soul. With all its sham, drudgery and broken dreams, it is still a beautiful world.”

I used to work in global health, so I had the opportunity to work in some pretty cool places like India, several African countries, and the Caribbean.