You know the agility exercises we do, where it’s all zigging and zagging around those pesky, petite, cones, to get from point A to point B? Ginger Florey Powell’s life has been kind of like that.

While her peers—for the most part—navigated a straight, paved path, Ginger took the scenic route, sometimes because she had no choice (like when she was 9 and her mother died, leaving her grandmother and father to raise her): ZIG. And sometimes because she wasn’t content with the choices the linear path presented her (first comes love, then comes marriage, then comes baby in a baby carriage—no thank you!): ZAG. Ginger zigged, and zagged,and built herself a beautiful life that included finding the love of her life in her mid-30s, becoming a stepmother to another little girl who lost another mother and reinventing her career in her mid-40s. 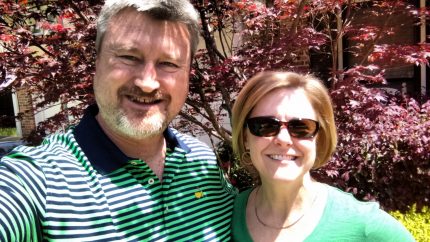 But back in the beginning, when she was raising her hand along with the other grade schoolers, Ginger wanted to be a teacher. The motivation was simple: sheloved her teachers. As a fanciful middle schooler, she thought maybe she’d become a movie star (not an actress, there’s a difference!). And as a high schooler, swayed by some career day predictions, Ginger thought maybe she’d look into psychology. But like so many of us, Ginger ended up working in an office, putting in 8 to 10 hours a day shackled to a desk. And, like so many of us, Ginger looked up one day and it was 20 years later. But unlike so many of us, Ginger didn’t look back down, scoot her chair in, and brace herself for another 20 years. She knew it was time to pave a different path.

Ginger was seriously contemplating graduate programs in Public Health, with an interest in Childhood Obesity, when her sister-in-law invited her to bring-a-friend day at FitWit. Ginger loved it! She loved it so much so that Ginger started traveling from Smyrna for the 6am class. So much so that she began volunteering at the Maynard Jackson teen program 2 days a week. So much so that she became a “helper” in the gym. So much so that when Josh sent an email around asking campers who might want to transition into the role of trainer, Ginger found herself studying for her trainer certification instead of her GREs. Within 6 months, at 44 years old, Ginger had become a certified trainer. Or, you could say, at 44, Ginger had finally found her way to the end of the circuitous path to becoming a teacher of sorts. 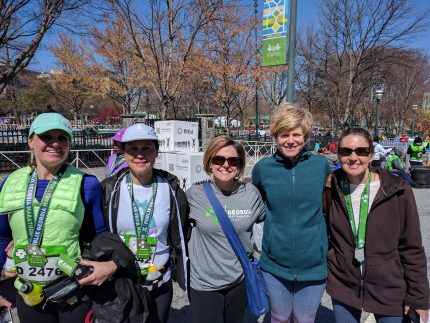 Has Ginger led a linear life? Nope. Is it lovely? Unbelievably so!

If there’s one word to describe Ginger, other than infectiously positive (okay, that’s two words) it’s flexible. She starts down a path, encounters an obstacle, and finds another way through. When Ginger became stepmother to Sarah Ann, she threw herself into the unexpected role, volunteering at school, doing pickups and drop-offs. Now a grandmother to a beautiful 4-year old girl, Ginger is getting to experience yet another way to live and love. “My granddaughter makes me happiest of all. At 4, her love is unconditional.” We can learn so much from Ginger, not just about how to do a band assisted pull up properly, but about how to be flexible in love and life. Sometimes it looks like you’re going off the path when you’re really just finding it.