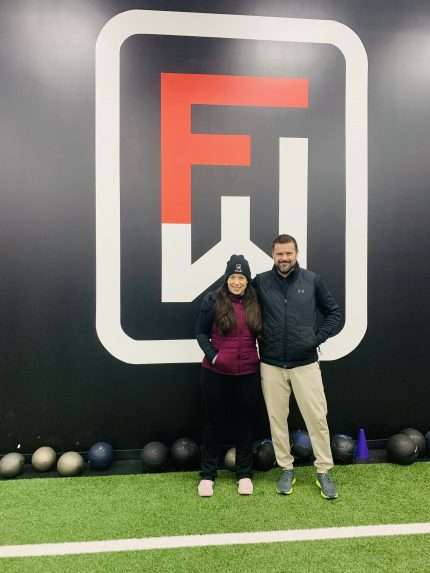 Kerry and Terry- the ultimate dynamic duo! The rhyming names are only the beginning. They always come as a package deal and brighten up the 5am class! Whether they do it on purpose or really are just two peas in a pod, they are often seen doing exercises in unison. They support and playfully push each other, especially in partner workouts like Grounded Flight. They bring a determined attitude with a side of humor to each and every class, and we couldn’t be happier to have them as a part of the morning crew. Thank you, Kerry and Terry, for lightening up the 5am class with some laughs.

Terry: You name it…Japan, Hawaii, Indiana, Michigan, South Carolina, Georgia. I’m a ‘military brat’, but I guess I would consider my hometown Warner Robins, GA. There’s an airforce base there so that’s where I ended up before I moved up here.

When did you first start FitWit-ing?

Terry: Spent most of my life playing some type of organized or recreational sport (soccer, football, baseball, softball, golf, tennis, hockey (street or ice), volleyball, etc.) I guess I was considered the “jock” in high school…but the only major sport I was never interested in or good at was basketball.  😊  That’s where Kerry comes in as she played on the “little rockets” basketball team when she was a kid (you should ask her about this).

Kerry: Growing up I was never really involved in competitive sports (except a minor stint in little league basketball. Don’t ask) although I loved being outside. As an adult, I learned that there were so many other things to do to stay active. Terry and I have done a multitude of things and love trying new activities. We hike, bike, kayak, etc. We went through a 3 year mud-run/obstacle course phase; then a running phase; now we have recently taken up skating (throwback, I know). As adults, fitness has been a very important part of our life for a long time. The early morning (5am) workouts for at least 9-10 years. We push each other to work hard and challenge ourselves each and every day.

Terry – Mobility and Strength have been a huge positive impact since being at Fitwit., I was able to graduate from a bottom-up press to full on kneeling KB press which is a game changer for me. I was never able to have the strength in my shoulders like that since high school.  Also, being able to do at least 5-10 pull-ups (un-assisted) is a great feeling.

Kerry: Wow, so many things. I can do more toe push ups which I’ve never really been able to do that many (always the girlie knee push ups). I’ve increased plank time and can do core exercises like never before. I’m consistently moving up in weight for strength movements (especially when Liz hints that my weight looks “easy”). Overall, my stamina, energy levels, and motivation to commit are at an all time high. (I should also mention that I can out ‘High knee’ and out ‘skip’ Terry when Renell and Bridget call for this intense movement)

What sort of changes in your life have you experienced out of taking on something like FitWit that was totally unexpected?

Terry: My lower hip and glute strength/mobility has surprised me to the point that picking up and carrying items (grocery or lawn bags) seems like nothing. Change was also noticed after being able to do our first 50K bike ride ever with practically no soreness the day after.

Kerry: I’ve seen a major shift in mobility and balance. I found myself balancing on a large down tree while hiking as it was blocking a trail and dismounting “light on the feet”..this has also has helped with my reconnection with skating. My functional fitness is top notch – “Hey UPS guy, no need to carry that heavy package all the way to the door…I’ll meet ya half way!”

We were hooked from day one. We’ve been to a lot of different types of gyms, boot camps, and classes and we know what we like. We’ve always tried to find that one place that has everything. Well, with Fit Wit we found it: Group classes for motivation; un-intimidating, focused; experienced coaches that care; early morning hours; fitness family environment; and accountability. The bonus is that we are always told the “why” behind what we were doing. We didn’t even know we wanted that until we came to Fitwit. And god bless those coaches for putting up with us at 5am! Oh and… Those ergs, though….

Kerry: Not really sure why Terry didn’t say “I go you go” as his first favorite because I’m his partner, duh. 😊 I also love disappearing act. I really love that one!

We both love the ergs!

Anything that involves that air bike…it’s the devil I tell you. Kerry agrees.

Besides being dubbed FW duo members of the month? Not sure how we can top that, but since you asked…. The moment we realized FW was going to be our fitness family was going to our first FW social. (We went to the Halloween social at Sceptre Brewing). Also being part of our first ever ERG sprints (Feb 2020) Pretty cool…

We know that fitness is a way of life. We are in for the long haul. Whether it’s carrying in groceries, backpacking across the south island of New Zealand (yep, we’ve done that); or being able to pick/lift up our grandchildren when our daughter has kids. It’s all important and we strive to be THOSE people.

Terry will tell you it’s: “You miss 100% of the shots you never take” – Wayne Gretsky

Kerry will tell you it’s: “Be Kind. Treat people the way you want to be treated”

But at the end of the day, for the two of us together, it’s “Always challenge yourself and look to becoming a better version of ‘You'”.

Terry:  Born in Okinowa Japan – I had an oppty for dual citizenship. I’m an engineer by nature, I can fix just about anything. I made the front page of the news in Warner Robins for a volley ball championship I was in.

Kerry: My spirit animal is my Mainecoon cat, Jude (yes, it’s a Beatles reference) and I’m a volunteer for a Mainecoon cat rescue. I play ukulele…I’m quite good. I too made the front page of the news in Warner Robins for volunteering with my special education bowling team.

We also have a 28 year old daughter who is a successful makeup artist on the Atlanta Film and editorial Scene!

So we’ve talked a lot about our hometown Warner Robins, Population 40,000. There were only TWO high schools which were HUGE rivals. Terry went to Warner Robins High and Kerry went to Northside High. We know lots and lots of the same people. BUT…we actually didn’t meet there. We met years later in Atlanta through some random “blind date” because apparently our friends knew we were exactly meant to be. I mean..our names were practically the same. We’ve been inseparable ever since. And just to add gravy, March is our anniversary month!

And we are not surprised that we BOTH got member of the month, can’t do one without the other. 😊  Cheers!

Focused calf work is great for all athletes not ju

Tight cranky hip flexors? Do you spend lots of tim

Runners and weekend warriors a like add this exerc

This is Pearl. Pearl pays great attention to detai

This is Keith Keith is a father, a husband, a ska

Focused calf work is great for all athletes not ju

Tight cranky hip flexors? Do you spend lots of tim

Runners and weekend warriors a like add this exerc

This is Pearl. Pearl pays great attention to detai

This is Keith Keith is a father, a husband, a ska